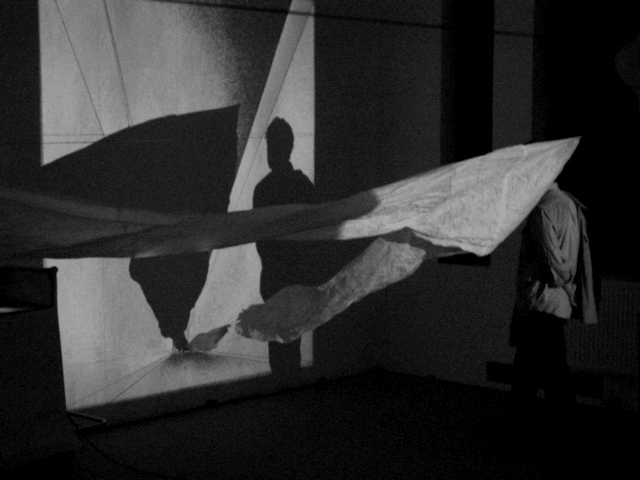 The origins of my work come from my investigations into the nature of space. Space is a geometricÐmathematical body, homogenous and infinite, made of numberless fundamental elements (points, segments and levels) which have an equal value. My research starts with an example, an object that is some sort of pretext: an absurd room, a place situated in a parallel dimension conflicting concrete and perceptible reality, a place hidden in some lost corner of my mind, a place among many, which every now and then comes to the surface and shows itself. Some of the elements emerge and distinguish themselves from the initial homogenous mass for mutual relations (for the affinity rather than for parallelism or belonging), determined by their precise positions. Forms of those elements are established through a series of exact proportional relations, even if the awareness of the arbitrary choice of the mathematical elements is not missing.

The research tool is linear perspective representation, originating in the Renaissance and evolving through centuries until the codification of projective geometry as exact science was established. The representation itself possesses strong powers of abstraction, far from being considered similar to real ocular vision, since it is a mathematical metaphor. It becomes possibile to analyse the space through decomposing it in simple elements, and afterwards recomposing it synthetically, through numerical symbolism that contains its intrinsic beauty. I use the symbolism as universal language in order to understand something about the intimate space of my mind, and also about methods and mechanism that move physical reality from which my mind receives experiences. In my last experiment, I interrogate myself about the bi-dimensionality and three-dimensionality of the space. In both situations the perspective is a geometrical projection.